New York, N.Y., USA (April 21, 2011) – While the water views from anywhere along Newport Harbor (R.I.) are already magnificent, they will be absolutely 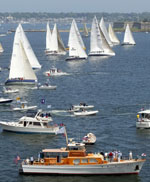 breathtaking in late June and early July when 32 ocean-going yachts set sail in the Transatlantic Race 2011, which charts a course that stretches 2,975 nautical miles from Newport to Lizard Point, at the end of a peninsula in South Cornwall (UK). This history-making event is organized by the Royal Yacht Squadron, New York Yacht Club, Royal Ocean Racing Club and Storm Trysail Club, with pre-start activities taking place at the New York Yacht Club’s Harbour Court clubhouse in Newport and the awards taking place at the Royal Yacht Squadron’s Cowes Castle clubhouse on the Isle of Wight.

The fleet runs the gamut from sleek traditional designs, such as the 94’ William Fife-designed Sumurun, to sophisticated super yachts, such as the 289’ custom Perini Navi clipper sailing yacht Maltese Falcon, with three masts so tall (190’) they barely clear Newport’s towering Pell Bridge, which serves as a gateway to Rhode Island’s famous City by the Sea. And as those who are veterans of ocean racing will attest, crossing the Atlantic Ocean is no small feat, especially when storms, testing seas and even icebergs (still a danger in the North Atlantic in June) are included in the mix of challenges encountered.

“What I find so incredible with open-ocean racing is that there are very few things that you can do these days that are the same as what people did 400 years ago,” said Sumurun’s owner Robert Towbin . “You have such a sense of history when you’re out there and for a couple weeks you get to feel, in effect, the same way Columbus felt.”

Towbin has sailed Sumurun in two previous transatlantic races, winning the Classic Division in the 2005 Rolex Transatlantic Challenge and taking overall victory in the 1997 Atlantic Challenge Cup presented by Rolex. He is currently preparing his classic yacht, which was built in 1914, to endure what will be its first challenge of the 2011 sailing season. “If you have an older boat, a race of this complexity takes a lot out of it, so we are putting a lot of work into it to get it up to date,” said Towbin.

Three separate starts – June 26, June 29, and July 3 – are planned (Sumurun will be in the first start) to “stagger” the yachts of different sizes and ability so that they will arrive in England in proximity to each other. Challenging their crews both mentally and physically, the larger boats hope to finish the race in 8 to 12 days, while the smaller boats may take up to 18 to 22 days to finish.

In addition to class winners, whichever yacht finishes the course with the fastest elapsed time will set the benchmark for a new racing record from Newport to Lizard Point, to be ratified by the World Speed Sailing Council. Rolex watches will be awarded to the record holder and the overall winner (on corrected time) under IRC.

It’s anyone’s guess which of the true racing thoroughbreds entered might prevail. Among them, scheduled to depart in the final race group, are the VOR 70 crewed by PUMA Ocean Racing Team – the Newport-based second-place finisher in the 2008-09 Volvo Ocean Race and entrant in the next edition as well –, Rambler 100, George David’s maxi rocket ship that has been tearing up race courses since the beginning of the year, including breaking the record for the RORC Caribbean 600 and taking line honors at the Pineapple Cup-Montego Bay Race, and ICAP Leopard which holds the current record from Ambrose Light to Lizard Point for monohulls using powered sailing systems.

And if that’s not impressive enough, there will be two all-youth teams competing, one from Germany (aboard the Andrews 56 Norddeutsche Vermoegen in race start two) and one from the U.S.A. (the All American Offshore Team’s IRC 65 Vanquish in race start three). In addition, four Class 40s, high-performance monohulls designed specifically for shorthanded sailing, will have their own class (starting in the second group).

Panel Discussion
On April 26, the Royal Yacht Squadron, New York Yacht Club, Royal Ocean Racing Club and the Storm Trysail Club, organizers of the Transatlantic Race 2011, will host a TR2011 Panel Discussion at the Manhattan headquarters of race sponsor Thomson Reuters. Gary Jobson will moderate the discussion, which will focus on the history of transatlantic racing, the challenge and appeal of transoceanic racing, as well as the upcoming TR2011 and its entries. Panelists will include George David, owner/skipper of Rambler 100; Chris Gartner, captain of Maltese Falcon; Larry Huntington, owner/captain of Snow Lion; Bob Towbin, owner/captain of Sumurun and representing the Royal Yacht Squadron; Rives Potts, Rear Commodore of NYYC and owner/captain of Carina; and sailing historian and author John Rousmaniere. An audio feed of the program will be available live at 5:30 PM EDT (2230 Universal Time) at transatlantic.bcgdev.co. The event will be blogged live at www.transatlanticrace.org on April 26th starting at 1730. You can also follow the event on Twitter @TransatRace2011.

The Atlantic Ocean Racing Series
The Transatlantic Race 2011 is the centerpiece of the Atlantic Ocean Racing Series (AORS), which includes the Pineapple Cup – Montego Bay Race, RORC Caribbean 600, the Annapolis to Newport Race, Rolex Fastnet Race, Biscay Race and the Rolex Middle Sea Race. Of the seven races in the AORS, three races, including the TR 2011 must be completed to qualify for a series victory. Each race is weighted equally in overall series scoring with the exception of TR 2011, which is weighted 1.5 times. All entered yachts are scored using their two best finishes in addition to the TR 2011. Awards for the AORS will be presented in November, 2011 at the New York Yacht Club’s Annual Awards Dinner in Manhattan.

Sponsors of the race are Rolex, Thomson Reuters, Newport Shipyard, Perini Navi, and Peters & May.

View the complete roster of entries

Rolex – Rolex, with its headquarters in Geneva, Switzerland, is one of the world's foremost watchmakers, with an unrivalled reputation for quality craftsmanship. Since its inception in the early 1900s, Rolex has introduced a series of revolutionary innovations, from the first waterproof watch, the Oyster, in 1926, to the first self-winding watch in 1931. This distinguished timepiece is treasured by individuals in every lifestyle. Rolex has always enjoyed a privileged relationship with the sea, the world of sailing and the call of the deep. The spirit and philosophy of the sport are in perfect harmony with values that Rolex holds dear: excellence, precision and team spirit. www.rolex.com

Thomson Reuters – Thomson Reuters is the world's leading source of intelligent information for businesses and professionals. It combines industry expertise with innovative technology to deliver critical information to leading decision makers in the financial, legal, tax and accounting, healthcare and science and media markets, powered by the world's most trusted news organization. With headquarters in New York and majoroperations in London and Eagan, Minnesota, Thomson Reuters employs 55,000 people and operates in over 100 countries. Thomson Reuters shares are listed on the Toronto and New York Stock Exchanges (symbol: TRI). www.thomsonreuters.com

Newport Shipyard – Newport Shipyard is unquestionably the center of New England sailing action and this year is no exception with the classic J boats from the 1930s, the Transatlantic Race 2011 and the 25th anniversary of the Bucket. For the most glamorous yachts this side of the Med, downtown dockage, lifts, a dedicated workforce, and every convenience from Belle's Café to a gym, visit: www.NewportShipyard.com

Perini Navi – Perini Navi is leader in the design and manufacture of blue-water sailing yachts. Famous for their revolutionary automatic sail handling systems and for their unique aesthetics, Perini Navi yachts are among the most celebrated vessels in the world. The company was established in 1982 thanks to the intuition of its founder, Fabio Perini. His great passion for the sea gave him the idea of creating a new breed of sailing yacht, one that could be handled by a single person thanks to a revolutionary sail management system, which is today the state of the art of sailing. www.perininavi.com

Peters & May – Leading global marine logistics specialist Peters & May ships over 8,000 boats annually worldwide, by air, sea and road. Peters & May offers transportation solutions for any size of yacht and is the preferred logistics provider of many of the world’s premier events and yacht racing teams, transporting yachts, equipment, containers and masts to all international destinations. www.petersandmay.com