As we gybe back and forth chasing every little puff and gust on our way to the Grand Banks, there is no doubt that the first few days have not been the transatlantic race that we had talked about and prepared for. With little energy being used and the need to sit patiently as we coax Jazz along the conversations range from sailing adventures of the past to which meal is the least edible in the freeze dried collection.

Timmy Davis can be found glued to the tracker up date, a particularly usefully piece of information or a stick to beat yourself with, very much dependant on how the last hour has gone. For Jazz, light winds are her most challenging of conditions so it often seems that both the tracker and the wind gods are against us.

Everybody finds different ways to deal with the race mentally, some like Anthony Haines sleep with music banging in their ears, loud enough to wake the dead and Mike Broughton has been running a Yachtmaster quiz for the Aussie’s onboard, who plan to take the exam in the UK .

The Grand Banks extend just over 200 miles south east of Newfoundland and are fabled for fog. Once the richest fishing grounds in the world, the fish stocks have collapsed from over fishing but rest assured the humans haven’t wiped out the fog.

Cold sea temperatures from the Labrador Current move south down the west coast of Greenland and bend around Newfoundland coast towards Boston. Icebergs get carried south on this current as they get released by melting sea ice in late spring. Fortunately it looks pretty clear for ‘bergs’ at the moment though we have an ‘ice gate’ called Point Alpha. This year it is positioned relatively far north and we cannot head north of this point, until we are east of it.

The shortest distance to the finish line takes us to Point Alpha (46 20N 051 00W) and right now the best routing for the northern group of boats looks to take us close to this northern boundary, maybe as close 25 miles off Newfoundland. Hence it feels pretty cold right now and Jake Newman has just broken out his balaclava! We are now 200 miles north of the spot where the Titanic sank.

Bowman Andy Hudson has just had a ‘Go Pro moment’ with his new mini video camera, we had about 40 dolphins swimming by the boat – he bought the camera for his sky diving and his crazy ‘base jumping’ that he does back in Oz with another Jazz crew – Jonno Davis

It looks like a couple of the boats have broken through in new winds well to the south. We plan to stay north as we cover our main competitors for the lead in our Class that are still tucked away behind us. Though we can’t deny we would quite like the warmer option, here the water temperature is just 6C, whereas just south of the Grand Banks the balmy Gulf Stream is around 21C! 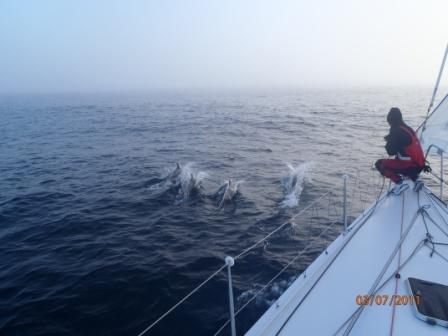