... describes both the current weather system across the Eastern Atlantic and as a result, the progress of much of the fleet in the Transatlantic Race, including ourselves on Concise 2. The low pressure system which we gather has been causing a lot of rain in the UK has nothing to drive it forward, and the result is very light winds as far out as our position some 700 miles from the finish, resulting in light headwinds.

The Class 40s were designed for strong downwind and reaching conditions, and therefore have a wide stern for power/stability, and two rudders to make controlling the boat easier in strong conditions. Whilst this was to our benefit a few days ago, it is now a huge weakness as the wetted surface area of the boat is incredibly high, causing a lot of drag to overcome in order to drive the boat forward. To try to counter this, we move crew weight forward to get the stern out of the water a little, which involves the crew sleeping in the bow on top of sails.

Despite the crew continuing to work the boat hard to make maximum use of what little breeze there is, there is little we can do to stop the advance of our nearest competitors. Scho-ka-cola, Varuna and Shakti are all closing in on our 30 mile lead, causing the crew to now scan the horizon nervously with binoculars.

Down below, the crew do what they can to take their minds off the situation. Tom Dawson’s ipod Classic has become a firm favourite, with the ability to watch videos being especially diverting – Alan Partridge and Ricky Gervais are current favourites. Often two people will watch the same thing sharing a set of headphones, meaning their simultaneous laughing can be heard throughout the boat.

The other thing which is getting some attention is our snack bag, which everyone tucks into more through boredom than anything – honey roasted nuts and Rice Krispies Squares are the things you have to move quickly to get. With the rest of the race likely to be pretty slow Tom Smedley who packed the snacks, is now concerned we might run out. We have plenty of freeze dried main meals, but running out of snacks would have a devastating impact on crew morale. Don’t tell the others, but I am contemplating hoarding some snacks to use as bribes later in the trip!

PS - note the big bag of toffees in the picture! 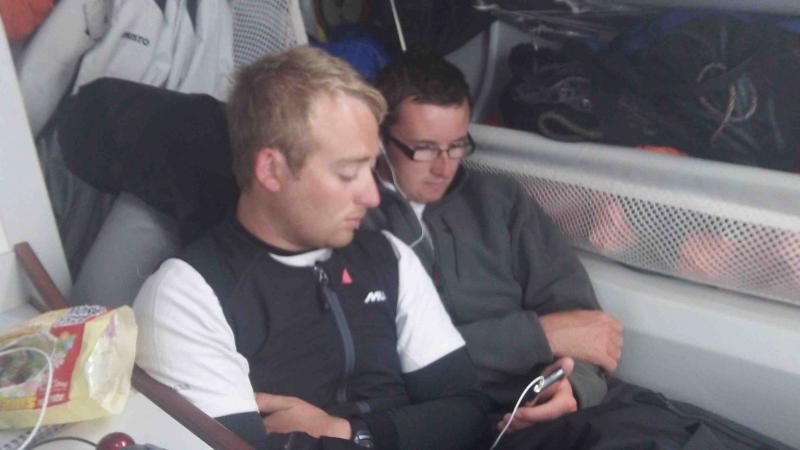