The Long and Short of The Transatlantic Race 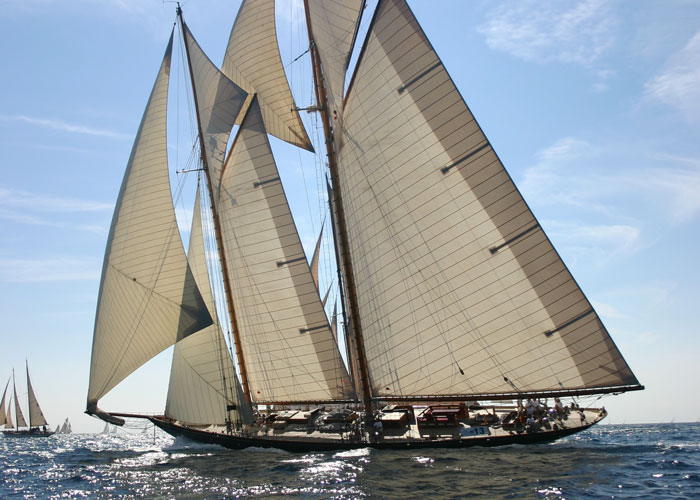 The 2,800-mile Transatlantic Race 2015 has drawn entries ranging from classic yachts to modern technical marvels, crewed by sailors with a wide variety of backgrounds and experience. Each entered yacht is assigned to one of three starts (June 28, July 1 and July 5) that are geared toward having all boats arrive at the finish off Plymouth, England, in close proximity to each other with the expectation of finishing in 15 to 20 days.

The 13 smaller vessels will take the first start, although one entry is an anomaly in both size and pedigree: the 140-foot-long, twin-masted schooner Mariette of 1915. Designed by the legendary Nathanael Green Herreshoff and built by the world-renown Herreshoff Manufacturing Co. (now the Herreshoff Museum in Bristol, RI), she is entered in the Transatlantic Race 2015 as a celebration of her 100th birthday. (She also competed in the Transatlantic Race 1997.)

Charlie Wroe of Falmouth, GBR will skipper the 140-foot-long, twin-masted schooner, Mariette of 1915, in the Transatlantic Race 2015. Celebrating its 100th birthday, Mariette of 1915 will be in the first of three starts. Racing Mariette of 1915 is a complicated effort, as she typically unfurls eight sails going upwind and has two sets of running backstays on the main.

“There is a lot of coordination or you get yourself in a right pickle,” said British skipper Charlie Wroe, explaining that her 16-person crew is made up of experienced sailors, including navigator Halvard Mabire who has five Whitbread Round the World Races under his sailing belt.

“Everyone sailing the race has done miles and miles on this boat previously. More than two-thirds of the crew is professional and the rest are keen amateurs. A lot of people have stepped away from their jobs and have put aside a month to get out here and be part of this” Wroe adds.

That includes owner Patrice Mourruau and his son Char Louie Mourruau who are very much an integral part of the crew when they are onboard. (The younger Mourruau worked as a deck hand on Mariette of 1915 between 2005 and 2007.)

At the other end of the size spectrum is the Mason 43’ Shearwater, a cruising boat owned by husband-and-wife Dan and Gretchen Biemesderfer of Guilford, CT. The Biemesderfers have completed 10 Newport to Bermuda races, but they never before have attempted a transatlantic passage.

A typical summer involves a cruise with Shearwater in Maine, and they know they may not be as fast as some of their competitors. Nevertheless, they are serious about racing the boat and performing as well as possible. “We are not cruising to the U.K.; we are racing to the U.K. and expect to do well,” said Dan Biemesderfer.

Although the couple expects to complete the race in 17 to 18 days, they are stocking the boat with four weeks’ worth of provisions to feed six people. “We eat well on the boat,” said Biemesderfer. “Some of our meals are pre-prepared so we can pop them in the oven, but there’s lots of regular cooking of steak, pork, etc., too. It depends on our mood and the weather conditions.”

Though Gretchen Biemesderfer learned to sail at the same time her husband did, she admits she doesn’t consider herself as adventurous as he. “We’ve never done the Transatlantic Race before, so for me it’s huge. It’s one of the most mentally challenging things that I’ve ever decided to do; I’m a little bit nervous, but excited at the same time.”

The second start will see a fleet of 21 boats crossing the line off Castle Hill Light on July 1, and the final start on July 5 will feature the four speed demons that are racing to complete the passage in less than 6 days, 22 hours, 8 minutes and 2 seconds – the record time established in 2011 by George David’s Rambler 100.

Prior to the race, Harbour Court, the on-the-water clubhouse of New York Yacht Club, will be aglow with a series of receptions and dinners that reinforce the bond of camaraderie among these offshore adventurers and their family and friends.

At the other end of the course, the Royal Yacht Squadron’s Cowes Castle clubhouse on the Isle of Wight will host the awards presentations on July 24, a prelude to the weeklong regatta that will celebrate the 200th anniversary of that club’s founding.

There are 38 entries sailing in the Transatlantic Race 2015, with the U.S. fielding roughly 18 teams, the U.K. six, Germany two, and Belgium and Malta one each.

Prior to the start of the TR 2015, many of the race boats will be making last-minute preparations at Newport Shipyard. Spectators are welcome to view the boats there and can enjoy a casual meal dockside at Belle’s Café (metered parking is available on Washington Street and the city parking lot is located across the street).

The best vantage point for watching the TR 2015 starts (scheduled for Sunday, June 28, Wednesday, July 1 and Sunday, July 5) is at Castle Hill. The yachts should be in the vicinity of Castle Hill Light at least an hour before the 1:50 warning signal and can be seen from the Jamestown shore as well, and then from Newport’s Brenton Point and Jamestown’s Fort Wetherill and Beavertail State Park as the fleet heads from the East Passage into Rhode Island Sound and on their way across the Atlantic.

Each yacht is equipped with a YB tracking device, which will enable anyone with a computer, tablet, or smart photo to follow, in real-time, the progress of individual yachts, a single class, or the entire fleet during the Transatlantic Race 2015. The tracker can be found here (it will be active 24
hours before the first start, June 28 at 1400 EDT).

You can also view the tracker on a tablet or smart phone. You must first download the YB Races app, then within the app, add the TR2015 race. There is no charge to follow this race.
Apple iTunes: https://itunes.apple.com/us/app/yb-races/id452193682?mt=8
Google Play/Android: https://play.google.com/store/apps/details?id=com.yellowbrick.raceviewer&hl=en

The race’s media team will be cranking out daily reports, along with photo galleries and videos from the starts and finishes, in addition to whatever images we receive from the boats during the race. You can find our media at the following locations: