Ninety days from today—on Tuesday, June 25—a fleet of 20-plus yachts is scheduled to depart from Newport, R.I., and head eastwards across “the Pond” in the Transatlantic Race 2019. The reasons for competing are unique to each sailor, but often range from a personal challenge to simply wanting to sail an ocean race. 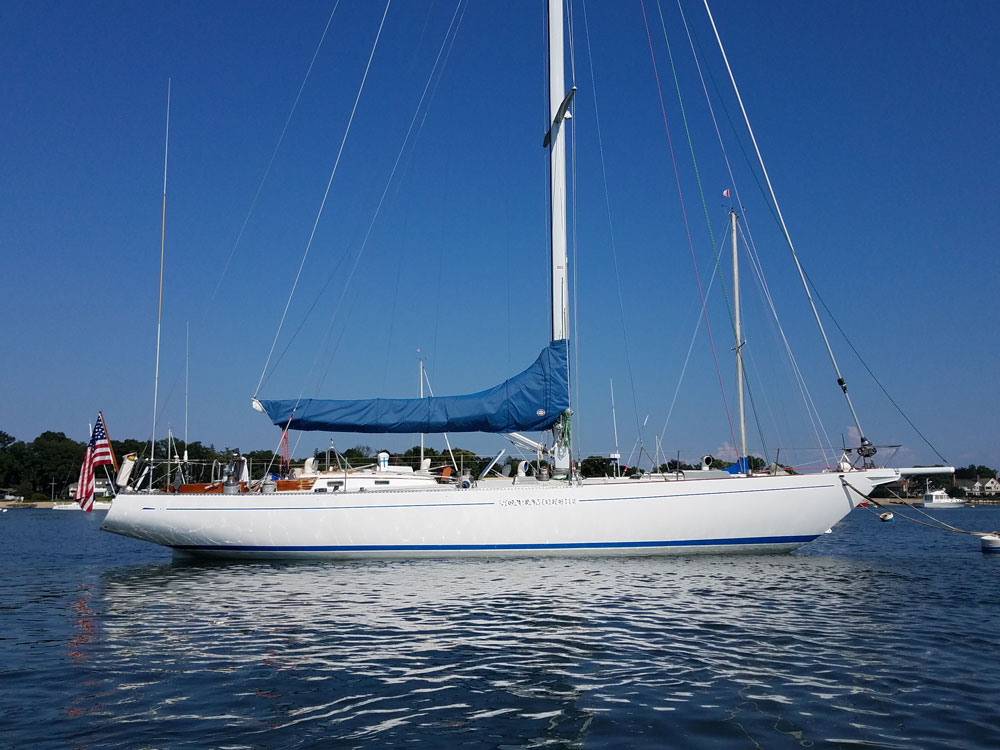 Among the fleet will be a handful of classic ocean racing yachts. A classic yacht stands the test of time by being a leading design of its day and still successful decades later. Retired architect Hiroshi Nakajima (Stamford, Conn.) will be at the helm of one such yacht, Hiro Maru.

Nakajima’s second Hiro Maru is a Sparkman & Stephens 49-footer that was launched in 1971 as Scaramouche, the first of a series of highly successful ocean racers owned by Charles E. “Chuck” Kirsch (d. 2011), the philanthrope and curtain rod manufacturer from Sturgis, Mich. The first Scaramouche won Class B and was second overall in the 1972 SORC. Five years later she won Class B in the 1977 Transpac Race for then owner Robert M. Alexander of California.

Nakajima, the President of the Board of The Food Bank of Lower Fairfield County, is a well-known sailor in New England waters. He grew up sailing in Western Long Island Soun. Later he headed an architecture firm in New York City, but could never stop dreaming of being on the water. “I used to think about how to ditch work and go sailing,” says Nakajima.

He has mostly achieved that longing. Nakajima has logged more than 20,000 nautical miles primarily sailing races such as the Stamford Yacht Club's 238-mile Vineyard Race (34 times), the 186-mile Block Island Race (30-plus times) and the 635-mile Newport-Bermuda Race (eight times).

Many of those races were sailed in his Swan 43 Hiro Maru, which Nakajima purchased in 1998 and still owns. Nakajima found his new Hiro Maru, the S&S 49, surfing the web. The yacht was located in Vancouver, B.C., and in desperate need of tender loving care.

“I’m kind of crazy. Every once in a while, I surf the internet looking for classic yachts,” says Nakajima. “This one popped up and it resembled my Swan 43. My wife suggested getting it for the Transatlantic Race. I went to Vancouver, looked at it, made an offer and the rest is history. I knew it was a famous boat and it looked like something that could be restored reasonably well and have a good time. It was one of those situations where the boat had good pedigree, a good builder and lots of potential.”

Upon purchase he had it trucked to his hometown and undertook an extensive refit: A new carbon-fiber mast measuring 5 feet taller (62 feet overall) and weighing 900 pounds less. New lower shroud chainplates to accommodate the new rigging layout of the carbon spar. A new aluminum fitting designed for the bow that doubles as a bowsprit for racing and anchor roller for cruising. Old thru hulls were removed and the holes sealed. The entire hull was blasted, faired and repainted. A reverse osmosis watermaker was installed, and the diesel cabin heater refurbished.

The final touch was an ode to the boat’s origins. Nakajima had the hull painted white, with a blue cove stripe, to resemble the yacht’s original look. The boat’s name and hailing port on the transom are also painted in the same shade of blue. Relaunched in the spring of 2018, Nakajima placed fifth in Class A in the 2018 Bermuda Race, his best finish ever in the race.

“This boat is [built by the Palmer Johnson boatyard] and built well. It’s a period boat from the late 1960s/early 1970s when they were building rugged aluminum boats. This is one of them,” says Nakajima. “The sensation that we’ve gotten is that it’s powerful, we’ve gained a lot of respect for the boat. When you see it loaded up; it’s incredible. It makes you pause and think about the load, but the boat’s built to handle it.”

Nakajima’s fingerprints are all over the refit. He enlisted the services of longtime friend Tom Anderson, a marine engineer and rigging expert, to engineer and fabricate items such as the chainplates and bow unit. Also, Cooley Marine Management in Stratford, Conn., performed the dusty and grueling work on the hull. But Nakajima spent significant time directing the refit and completing a daily work list himself. “I’m old school, I do my own work,” he says. “Throwing money at a boatyard can get expensive. I can do most everything but welding.”

During the race Nakajima will have his hands in every part of the onboard action and will also wear the hat of cook. Nakajima subscribes to the belief that an army can’t march on an empty stomach, and during the two-week race the Corinthian crew will enjoy fresh, hot meals, which Nakajima will prepare himself. He and his wife have prepared a food survey for the crew to determine the limitations in their diets. They’ve developed and rehearsed certain recipes to determine preparation and cooking times. But he finds himself vexed by the task of victualing the boat.

“It’s the biggest problem, really, planning the provisions and making sure everyone can eat all the food,” says Nakajima. “I’m a firm believer of having warm cooked food. I’ve tried different foods, frozen foods, and at the end of the day it takes no longer than cooking from scratch. As long as you develop a recipe that can work in difficult conditions. We’ll carry some frozen and freeze-dried food for emergency, but the main menu we’ll be cooking from scratch.”

Racing the Transatlantic Race 2019 will fulfill a lifelong dream for Nakajima. “I’ve always wanted to do a transoceanic race," he says. "Not as a bucket list item, but as a challenge. I’ve just always wanted to go."

That he’ll be going in style on a classic yacht, with a belly full of food, is an added bonus.