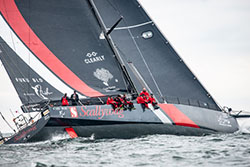 NEWPORT, R.I. - Eyes are glued to the tracker and bets have been laid for when the first two arrivals in the Transatlantic Race 2019 will reach Cowes.

At midday UTC, Lee Seng Huang's 100-foot maxi, SHK Scallywag had just passed Portland Bill and was using her length and towering rig to defy both the current and apparent lack of breeze in the forecast. The Andy Dovell design was making 12 knots directly at Hurst Narrows and the western entrance to the Solent prior to the final 11 nautical mile leg to the Royal Yacht Squadron finish line off Cowes. She had extended her lead to 45 miles over David and Peter Askew’s VO70 Wizard, which at midday was nosing into Lyme Bay to the east of Start Point.

While a late Friday afternoon finish has been anticipated for SHK Scallywag and an early Saturday morning one for Wizard, progress for the two leaders is expected to slow this afternoon as the tide turns foul both in the Solent and along the Dorset coast. Due to the phase of the moon, this foul tide will be a big one, so gains and losses will be about rock-hopping along the coast, something that neither boat will be relishing due to their deep draft (SHK Scallywag draws 5.6m (18 feet)).

Onboard Wizard, the ultra-competitive Charlie Enright was having to tame his frustration, having not only been helpless to prevent SHK Scallywag from sailing past them, but also due to their partial invisibility at the time due to having an inoperative tracker.

“We had to make our big tactical decision about the high pressure and they weren’t on the tracker, so we had no clue of where they were. Whether they sailed to our line because they could see us and wanted to put themselves in the same body of water and just grind it out - I don’t know. At the same time, it's like, ‘It shouldn’t be that close to begin with,’ so that tempers expectation,” Enright philosophizes.

As to how the larger maxi has managed to extend on them, the former Volvo Ocean Race skipper maintains that aside from their waterline length advantage “these conditions certainly suit them as it is very tidal.” Timing-wise he believes that SHK Scallywag is also better set-up to make the gate at the Needles this afternoon. “It is an unfortunate time to be finishing because while they get in early, there is a big transition to come. We were assuming 24 hours to the finish from the Lizard, but it's likely to take us longer,” Enright said.

Looking ahead to this afternoon Enright said: “Right now we are going upwind in a little bit more wind than we anticipated - a little easterly drainage gradient and it should heat up to be a nice British summer day. Then there’ll be a thermal component and there’ll be a tricky transition into and out of that as the sun goes down. Plus there are a lot of tidal gates. So, the hardest part of the trip in some ways is still to come.”

While anchoring, to prevent them drifting backwards if they are becalmed in the foul tide is usually unthinkable in a yacht this big, Enright confirmed that it has been something they have considered.

Meanwhile, out in the Atlantic, two scenarios are playing out. There is the northern group, that is the next wave following the leaders. With the exception of Giles Redpath’s Pata Negra these have now turned their bows east, away from the direction of Iceland and are making progress around the northern perimeter of the giant windless zone of high pressure.

Holding third place on the water, Clarke Murphy’s 82-foot Aegir is now on course for the Scilly Isles and Land’s End albeit only making 7 knots. Astern of her Eric De Turckheim’s Teasing Machine is taking the most extreme route north. While Aegir yesterday almost reached 52°N, the French offshore aces are already up to 53°42N but making twice the speed as Aegir. Astern, her rival Jean-Pierre Dick’s The Kid is attempting a slower but less circuitous route around the northern side of the high.

Enjoying not having to add miles to their already lengthy voyages by having to sidestep a high-pressure system, the second half of the fleet continues to sail a route east along or near to the great circle to the Lizard. They continue to reach along in the southerly wind in the front that has been with them since they were passing south of the Point Alpha ice exclusion zone earlier this week.

Leading the charge in this group is Lucy Georgina (at right), the XP44 campaigned by Englishman Peter Bacon.

“We have had a good couple of days,” Bacon reported. “We have covered about 500 miles in the last two days, which is good for us because we are not a very big boat. Everyone is well. The last few days have been a bit frustrating at times but we are heading more or less where we want to go.”

Earlier in the week when the front was at its strongest Bacon said it had been manageable, typically blowing 25 knots but at times over 30. “What made it uncomfortable was the current because we were in and out of the Gulf Stream and wind against current makes it quite choppy.”

With Constantin Claviez’s Swan 441 Charisma the final boat to pass A3, the southeastern most corner of the Point Alpha ice exclusion zone, earlier today, the fleet is now free to sail its own course until the final mandatory mark of the course, the 4-mile long gate south of the Lizard.