If the definition of wilderness is a place lacking the obvious touch of mankind then the North Atlantic surely qualifies. We have been out now for more than a week and other than the first few hours of the race, we have seen twoor three freighters in the distance and, this

morning, another competitor as they crossed in front. That’s it. Mercifully, we have seen almost not trash. So while we are alone, that doesn’t mean there is nothing to see. Far from it.

For commercial shipping this wilderness is a really just a highway. A few see it from the deck of a cruise ship. Most from an airplane window at 40,000 feet. Sailing across gives you an entirely different perspective. We get to see it up close and personal. And it’s beautiful. The skies during the day sometimes blue and sometimes boiling with rain squalls, all reflected in the heaving swell. The seas themselves form their own unique topography which is fascinating to watch as the crest and change shape around the boat. At night the stars (when we can see them) form the perfect dome across which we can easily see satellites as they blink their tracks across the sky.

While we haven’t seen too much of our two legged brethren, there has been plenty of wildlife. You don’t see it all the time like in the zoo. But it’s here and a nearly constant presence. We see a lot of two kinds of birds. The first are maybe Petrels(?) and they soar among the waves literally without a wing beat as they use the wind and the air currents flowing over the waves to create effortless flight. Very fun to watch. The second are small black birds who flit endlessly in pairs up and down the troughs of the waves. How many calories they must burn staying continuously aloft is mindboggling to consider.

Of course everyone’s favorites are the dolphins. We see the white sided variety multiple times a day. Sometimes they come charging up to the boat to pay a visit and show off jumping in and out of our wake. At night they look like torpedoes as the bio luminescence glows in their wake. Other times they simply pay us no mind as they cross us heading who knows where. When we were battling big seas the other day, we saw them leaping out of the sides of literally 40 foot waves. Amazing. We have seen multiple turtles including yesterday when we saw a huge leatherback. Indeed, sadly, I think we hit one yesterday with the rudder. He took a chunk out of the leading edge. Hopefully all he got was a nasty shock. Yesterday we also saw our first whale, a sperm whale that surfaced right next to the boat.

The wildlife isn’t only in the sea or in the air. We actually have some right here on the boat. Most is the microscopic variety which is inhabiting our clothes and our bunks. By anyone’s definition, too gross to describe here in this family friendly post. We do, however, have a larger species on board. The seldom seen Greater North Atlantic Raccoon. Entirely nocturnal, he is nearly impossible to spot but you know he is around. Occasionally you can catch him nosing through last night’s cold freeze dried dinner or worse yet the congealed remains of the “breakfast skillet”. He leaves candy wrappers in his wake and we have tracked them to the carbon cave at the back of the boat. If you shine a light back there all you see are the whites of his eyes and the gleam of his teeth.

Let me finish today on a different note. In the very trying circumstances of the day we tangled with Larry’s bear, I saw some outstanding seamanship on the part of this crew as they handled this hooligan of a race boat in very big winds and even bigger waves. Tery in particular stands out as being cool under pressure and steering us away from the center of the low during the first hour. The guys on the foredeck wrestling reefs in and hauling down insanely flapping sails. I know that I felt an absolute enormous responsibility for the safety of the crew and the boat when I was at the wheel as we thundered down huge waves. Tim Keyworth and Henry Little did an outstanding job in the dead of night in zero visibility driving through 40 knot winds and spray while navigating the mogul fields on the front of the waves. Often at 25 knots of boat speed in the pitch black. We didn’t wreck once. The experience only solidified my confidence in this boat, but more importantly, the whole crew. 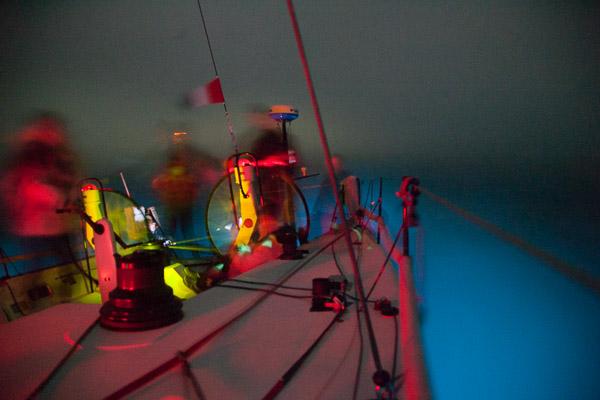 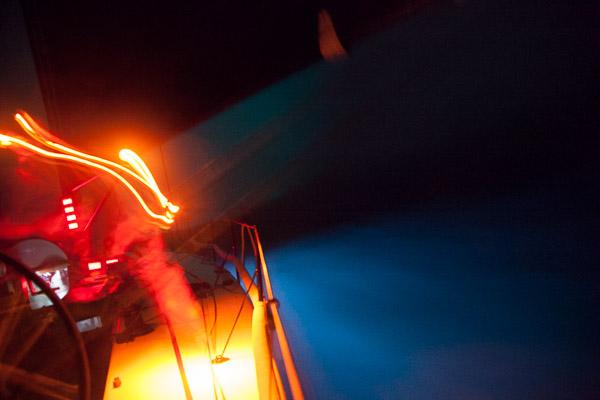 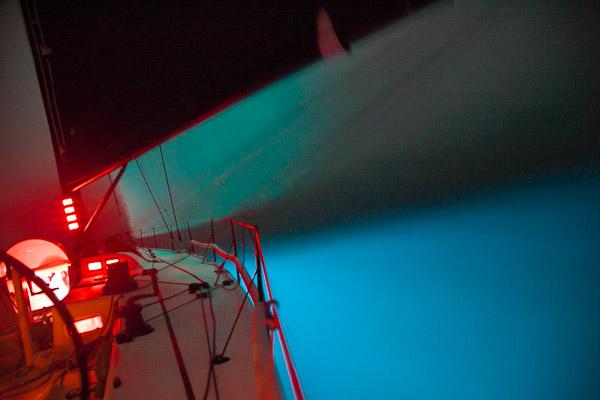 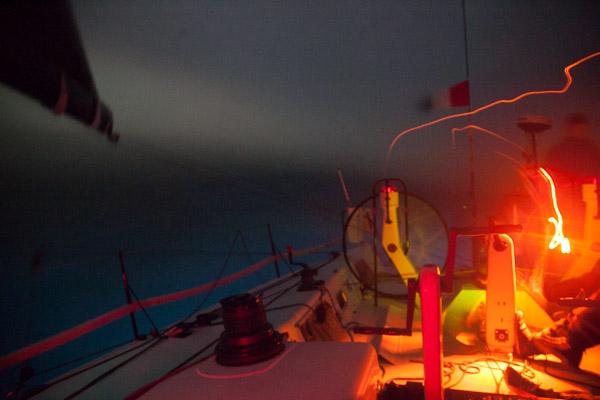 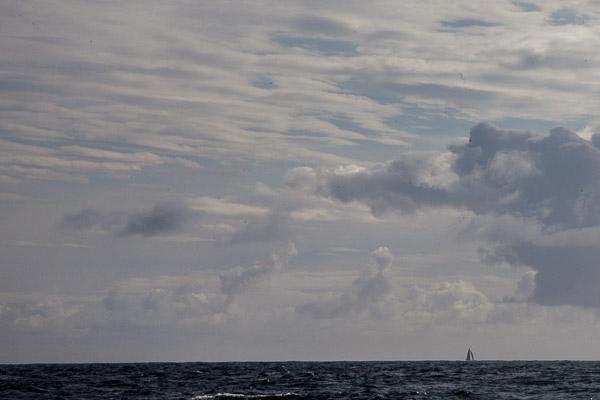 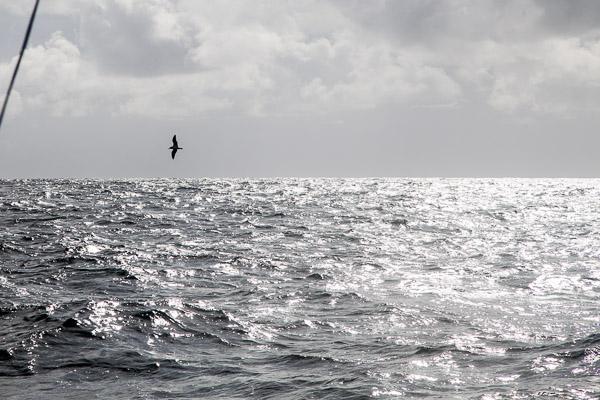 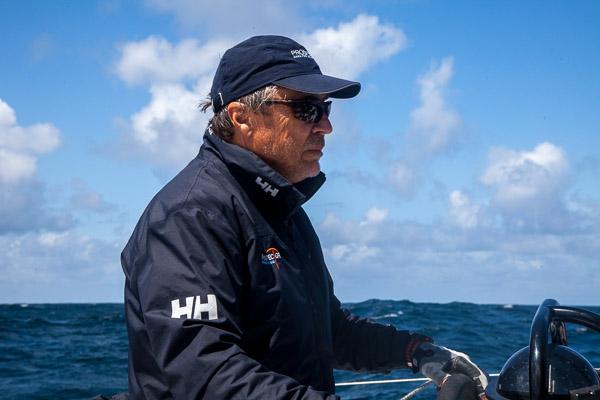 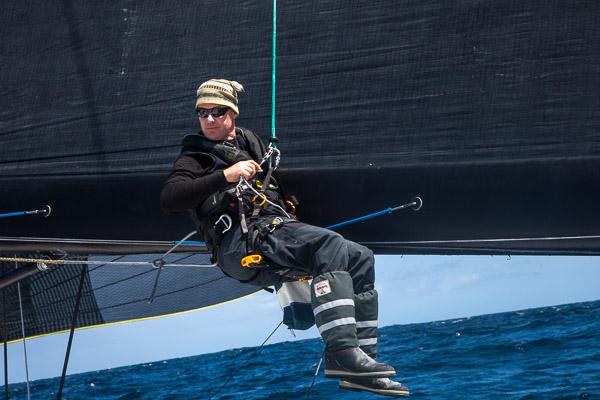 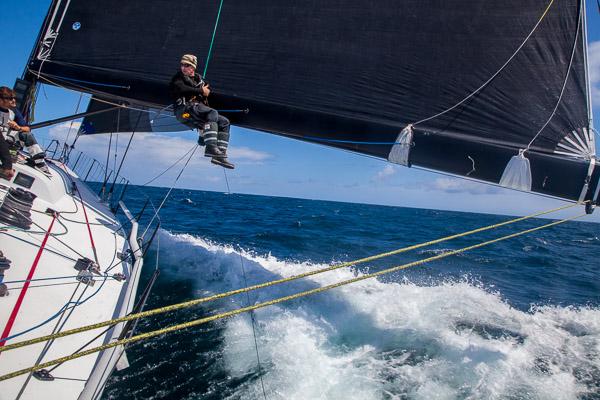