COWES, England – A flurry of finishes in the past 36 hours have seen the three class champions, as well as the overall winner, crowned in the Transatlantic Race 2019.

In IRC 2, Peter Bacon’s XP-44 Lucy Georgina scored a come-from-behind victory over Giles Redpath’s Lombard 46 Pata Negra to win the class by 47 minutes on IRC corrected time. The two boats finished under the cover of darkness last night, separated by a little more than eight minutes on elapsed time in what is one of the closest ever finishes in the history of the Transatlantic Race.

At one point last weekend, Lucy Georgina was more than 100 nautical miles astern of Pata Negra, but the leader fell becalmed off the coast of Ireland while the hunter rode strong southwesterly winds up from behind.

By the time the two crews reached Land’s End on the southwest corner of England, Lucy Georgina was within two nautical miles, and a match race ensued over the next 180 miles to the finish. They swapped positions on numerous occasions, always taking an opportunity to cover when it was there, but Lucy Georgina proved nimbler in the light winds experienced up the English Channel.

“Lucy Georgina came with the breeze following the whole way,” said Andrew Lis, the 26-year-old skipper of Pata Negra. “Even when she caught up, we were stuck to the ground. Pata Negra’s wide and canvassed in a way that runs well offshore in a breeze, but in light air we don’t have the sail area. Lucy Georgina could sail lower and faster. She was a great competitor for the last section of the race from Land’s End. She pipped us at the finish, so well done to her.”

“It’s a great result for us,” said Peter Bacon, the skipper of Lucy Georgina. “We’re fortunate that the weather favored us and not the faster boats. It’s pretty near the top of my accomplishments in sailing. I’m an amateur sailor. I’ve done the Newport-Bermuda Race a few times, but this is right up there.”

Bacon added that they were relived to finish when they did because they ran out of propane right around when they reached Land’s End. So the crew had no hot water or hot meals for the final day and a half of racing. 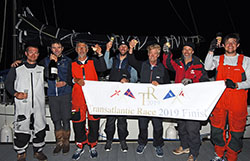 Bacon, who was also the navigator, said that the first few days of the race were uncomfortable as they raced upwind in the eddies of the Gulf Stream. “It was wet and turbulent,” he said. “We were fortunate at the corner of the ice gate. The weather lined up and we were able to point in the right direction. We had multiple days of 220 to 230 nautical miles. And then in the end the high pressure benefited us. We were fortunate.”

In IRC 3, Hiroshi Nakajima scored “an incredible win” with his aluminum S&S 49 Hiro Maru that was originally launched in 1971. Nakajima and crew finished the race at 1731:40 UTC for an elapsed time of 17 days, 2 hours, 21 minutes and 40 seconds and a victory over Rives Potts’ venerable Carina, the grand dame of the fleet. 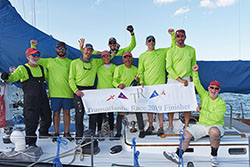 Carina had led the class for most of the race, but Nakajima believes it turned in his favor when they passed the Isles of Scilly to the south while Carina passed to the north.

“We did not go as far north as Carina following the weather,” said the 62-year-old Nakajima, a retired architect. “We were able to stay closer to the great circle route. When we passed the Scilly Isles we went outside while Carina went inside. I think we enjoyed slightly better breeze than Carina, we really closed the gap at that point. Everyone’s just excited, very ecstatic.”

Carina posted an elapsed time of 17 days, 0 hours, 3 minutes and 45 seconds in its third Transatlantic Race this decade. But like in 2011, when it led approaching the finish only to place second in class, Carina was again undone by stronger winds astern.

“The boats that were behind – 50, 60, 70, 80 miles behind – had a wind band carrying them at 8 to 9 knots for a week and it never caught up with us,” said Potts, a past commodore of the New York Yacht Club. “Coming up the channel today we were going well at Portland Bill and making good progress, then hit a dead spot for three or four hours. It all depended on where you were on the racecourse. They sailed a great race. That’s yacht racing.”

“It was a long race, longer than I thought it would be,” said 52-year-old Peter Askew (Riderwood, Md.) from Paris, where he was enjoying a European vacation. “I think we were lucky in the middle of the race. We hooked into a low that stayed with us for four days. That gave us a big push halfway through. We covered a lot of miles those four days, almost did 500.”

Two boats remain to complete the Transatlantic Race 2019. Mark Stevens’ Kiva, a McCurdy 49, is expected tonight around midnight UTC and Constantin Claviez’s Charisma, a Swan 441, is expected next Wednesday, July 17.